Every day we come across inspirational people in different guises.  During Teacher Appreciation week, we are taking a moment to give thanks to the tireless efforts of one such educator - Sandra Foskey who has brought her love for health to her job at Loretto Elementary in Jacksonville. 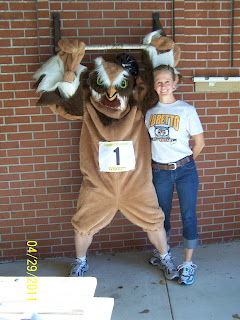 Sandra Foskey’s enthusiasm is contagious.  She is a competitive triathlete, who is training for her first Iron Man race in November in Panama City.  It was this passion for health and fitness that she wanted to share with her students at Loretto Elementary, where she assists teachers in classrooms, directs bus duty in the morning and afternoon, and helps out at the cafeteria.
She first came to hear of the First Coast Kids Triathlon while in the classroom.  Held annually, the race consists of a 100-meter swim, 3-mile bike trek and a ½ mile run for the junior division (ages 5-10). The senior division is for ages 11-15 and includes a 200-meter swim, a 6-mile bike trek, and a 1-mile run.   Billed as the fastest growing sport in the world, the Triathlon allows kids to race against other kids in their same age group.
Five students from Loretto Elementary had participated in the 2010 Triathlon and were motivated to create a team from the school for the 2011 triathlon. They approached Sandra and she brought her enthusiasm and passion to create posters, flyers, emails to spread the word.  Her tactics were highly effective. By the time the Third Annual First Coast Kids Triathlon rolled around, 132 children had signed up for the Loretto Elementary team – Team Wisdom.
Sandra Foskey wasn’t satisfied with just creating Team Wisdom.  She held two informational clinics to help prepare the students.  She went over every aspect of the race and answered questions from children and parents.  She also empowered parents to participate in their kids’ training by regularly emailing them information on safe biking trails, swimming pools and nutrition tips.
Her hard work and zeal paid off.  At the end of the Third Annual First Coast Kids Triathlon, all 132 of her students attended and finished the triathlon.  Parents, grandparents, aunts and uncles came out in droves to support their little triathletes and talked of races they could do as a family.  Sandra hopes the enthusiasm and the confidence the children received will encourage them to try other goals in the coming years.  “Hopefully, even if they don’t immediately pursue any physical activity, they will hopefully be equipped with enough knowledge to know how to in the future. I hope it inspires them to do more physically.” 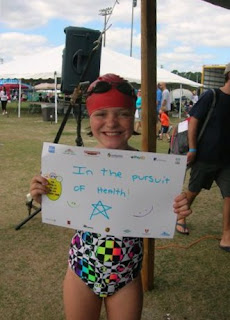 When asked of what this race meant to her, her face lit up, “It was the most gratifying experience I ever had.  I was on ‘Cloud 9.’ I think this meant more to me than any race I’ve completed. Seeing the children’s smiles as they crossed the finish line did more for me than achieving any of my personal health goals”.
Changes are made with little steps like these and for your efforts in helping our little ones, we salute you, Ms. Foskey!
Do you have an inspiring story to tell us? Email us at socialmedia@bcbsfl.com