In the Pursuit of Health one day at a time!
Part 2 of 4
Any one of us has the ability to change our lives one day at a time. The question is – what provides that motivating factor and how do you get started?
Common research says that doing something for twenty-one days will get you into the habit.  I’m always impressed by people that set their mind to it and make that commitment.
This is the second of four inspiring stories of Blue Cross and Blue Shield of Florida employees who have made a commitment to be all that they can be and who have made some pretty dramatic health improvements along the way.
Brian Benda
Brian Benda is in his early 40s. Two years ago on his 40th birthday – Brian found himself weighing in at 215 pounds and winded after a simple volleyball game.  He’d steadily been putting on a pound or two a year since getting married in his 20s (yikes – as a married person of one year this scares me). In 2009 after taking a personal health assessment (PHA) in MyBlueService, he was frustrated with his BMI and risk for high blood pressure.  He also wanted to be able to keep up with his two boys as they became teenagers.
So he just did it! Brian made a commitment and a resolution to run. He chose running because of the low investment (you just need yourself and a pair of running shoes to get started) and because of the quick results he’d seen many of his friends have with the activity.
He started by putting one foot in front of the other (literally) and began by alternating running telephone pole to telephone pole and then walking telephone pole to telephone pole in his neighborhood.
He set a goal of working up to his first 5k by May of 2009. After he accomplished that goal he was hooked! Brian lost 15 pounds in the first four months of running and has lost a total of over 30 pounds that he’s been able to keep off. Since 2009 he has run 20-25 races including the Gate River Run and the Outback Half-Marathon both in Jacksonville, FL.
On what’s motivated him to keep going, Brian says “Organized races are fun, interesting and social. In addition, the health effects from running have allowed me to participate more fully in other sports such as basketball and volleyball that I wouldn’t have otherwise attempted. Finally – my health and my energy level has improved dramatically”.
Brian before... 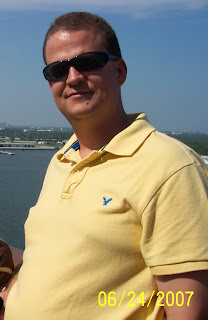 While running got him started, Brian has adopted other healthy habits (funny how healthy habits breed other healthy habits). One such activity was bringing his lunch to work versus always going out to lunch. His typical lunch was about 800 calories and he’s brought that down to on average a 300 calorie lunch. In addition – instead of eating just a big lunch – Brian eats fruit throughout the day. Not only has this helped him to maintain his weight, but he’s saved quite a bit of money.
And Brian after... 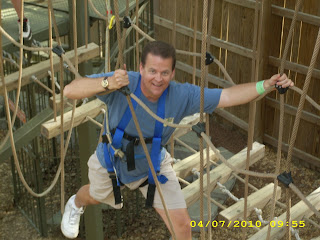 Brian’s 2011 goals include:
He intends to do this by adding more strength training to his work-out regimen.
His advice to new runners:
Got an inspiring story to share? We want to hear it!
socialmedia@bcbsfl.com